Recently, I received the following picture and message from a dear friend of some 35 years I have known since my ashram days:

I was on the Kailash Yatra from September 1st through the 23rd. It was super, awesome, terrific!

Below is my favorite photo of Kailash from this trip. It was taken the morning of September 14th, from the North-East side before summiting Dolama Pass. When the sun hit Mount Kailash everything turned golden, it was a great darshan!

Please feel free to share widely, as it is a nice Darshan photo! It would just be nice to share the darshan, is my feeling. I have other photos that I can send you if you would like to see. We had excellent weather and I saw Kailash from lots of angles that previously were hidden by clouds and fog on the other trips.

OK, all the best… Hope everything is well for you, wherever you might be!

Why Does Karthikeya Have Two Wives?

With electricity, as an electron moves down a wire, two waves follow along the electron… a magnetic wave and an electric wave… the two wives of the electron.

The double helix of DNA structure wraps around the central core of the DNA. Karthikeya has two wives.

The medical symbol caduceus with the two snakes around the center. Karthikeya has two wives.

Making Sense of the Gods

These days, many people both western and eastern, are put off when entering a Vedic temple. Seeing beings with many arms, the head of an elephant, or in the form of a bull just does not make sense to the current modern perspective. Admittedly, as a teenager, I too would have been put off if I was to walk into such a temple. It would have just seemed too strange.

We live in a rational age. Things have to make sense or they are rejected. However, as science advances, things that once made no sense do begin to make sense. For example, a couple hundred years ago, the idea of unity and oneness made no scientific sense. However, with the advent of modern physics, the concept of unity is front and center for many theoretical physicists.

To understand the essential science of the Gods, we can begin to make sense of Vedic knowledge. Yet for the foundation of that understand to be solid, we must start with the basics and build upon them. Few people are willing to do that. Those that have rejected spirituality are rarely willing to take the time. Those who have embraced spirituality feel they have no need. Both perspectives are flawed. The more deeply and fundamentally we understand life and our existence, the better. Just because one believes in God, does not mean it is time to stop learning and discerning. Also, because we have become identified with a particular paradigm does not mean that there are no other valid paradigms. To ignore other paradigms is called ignore-ance. In this day and age of western science, that paradigm should not be ignored. By taking the time to investigate the Vedic paradigm, we can come to see the tremendous value of Vedic knowledge.

So let’s set any aversions or affinities aside for a moment and consider the following. Fundamentally, the Gods are laws of nature. There is a mechanism or mode of operation underlying the universe… they are laws of physics or laws of nature. Each God or Goddess is a particular aspect of the laws of nature, just as addition, subtraction, multiplication, and division are aspects of arithmetic.

Ganesh is the principle of categories or structure. To compare creation to a crystal, Ganesh would be the molecular structure of the crystal. Ganesh then is the remover of obstacles. By enlivening the underlying structure of life (Ganesh), we strengthen and stabilize our lives thereby removing obstacles to our progress. Ganesh is also the protector of women and children. Sociologically the family structure has traditionally be held together by the bond of mother and child. That family dynamic gives structure to life. So naturally, that is upheld by the principle we call Ganesh.

Kartikeya is the harmonizing principle of the dynamics underlying existence. if Ganesh is likened to the structure of a crystal, Karthikeya is the order of the dynamic display of light as it is shined through that crystal and the crystal is rotated. That is why Karthikeya is referred to as the commander and chief of all the Gods.

Consciousness (Shiva) becomes conscious of itself and perceiving it as ‘other’ duality is born. Aware of the duality, three things emerge. Then four, five, and on to infinity… this is the self-interacting dynamic of the structure of Veda. The exquisite display of the beauty of what is created pulls awareness into identity with that world of relativity. That force is call maya. That principle is call Mother Divine or Shakti. Shakti is the force that compels the universe to manifest.

All the Gods can be understood in this way. That is the rational starting point. Then, as one builds upon that foundation, more and more is understood. For example, the shape of Ganesh’s head can be understood to be like that of an elephant because of the mathematical nature of that principle. That principle permeates and will up through creation in many ways. For example, the shape of a leaf or the the cross section of the human brain.

The more we study Vedic Knowledge in this way, the more sense it makes. By deeply understanding the scientific principles underlying things like cognition, yagya, puja, vastu, Gandharva Ved, jyotish, etc. all the various aspects of life are more fully understood and appreciated. Also, any distortions or superstitions that may have crept in can be purged. Superficial understandings give superficial results. Deeper understanding of Vedic Knowledge reveals a technology to bring life in harmony for all humanity. My life is dedicated to bringing out that knowledge in its purity for all of humanity to enjoy, regardless of one’s religion, race, philosophy, or nationality.

I was planning to write something very simple about how Lord Shiva’s drum is shaped like two triangles (an upward pointing one as Shiva, the linga, and a downward pointing one as Parvati, the yoni). The drum in that form represents the unmanifest. When Lord Shiva plays his drum the two triangles (Shiva and Shakti) come together and overlap forming the six pointed star representing manifest existence, the universe.

However, the more I think about it the more beautiful it becomes. The geometry goes on and on, forming the Shri Yantra by superimposition; forming all yantras and forms, like circles by spinning, etc. The mathematics of the six-pointed star alone is a vast, abstract algebraic equation – abstract algebra being the mathematics underlying all existence.

I remember as a child around age 7, my family watched a Walt Disney episode that displayed the wonders of the five-pointed star. I was mesmerized. The ancient Greek Pythagoreans drew that star on their palms. Simple geometric forms are fundamental to existence, the mathematics of which is the mathematics of the unified field, the underlying basis of existence. Yantras are mathematic computer chips that enliven the foundation of existence within the cosmic computer of human awareness. 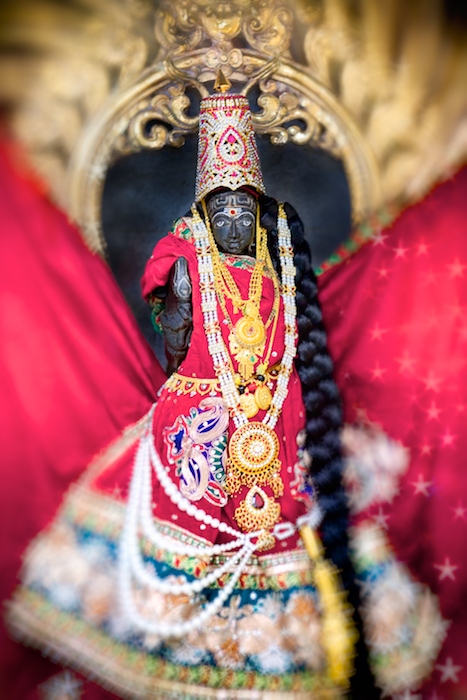 These days at Mount Soma have been wonderful. The feeling of Mother Divine’s presence is exquisite. The fall colors and lovely October sky add to these magical days. Today we have the Durgasapthashati (Chandi) Havan at Mount Soma. It starts at 11:45 local time and lasts about five hours. It is extremely powerful and it all makes for one of my favorite days of the year!

Please visit my latest article just posted on Linkedin by clicking here:
“To Solve Problems, Start With ‘Being'”.